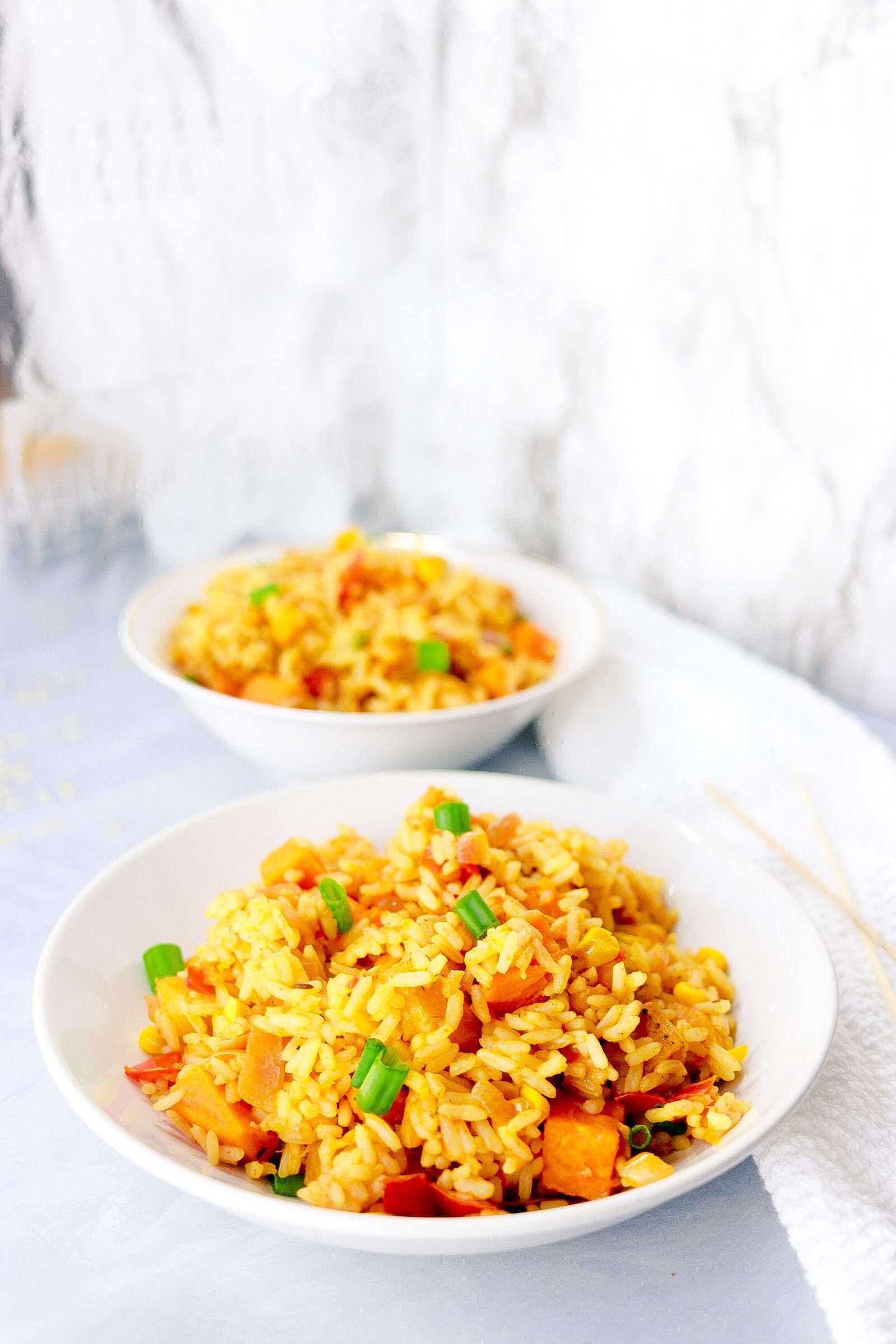 I had no idea what I was thinking when I decided to make this vegan rice recipe. In fact, the recipe itself wasn’t well thought out or planned out.

I happened to have sweet potatoes, plantains and tomatoes sitting in my kitchen and wondered what will happen if I just mixed it all together. I mean, isn’t that how the power puff girls were made? 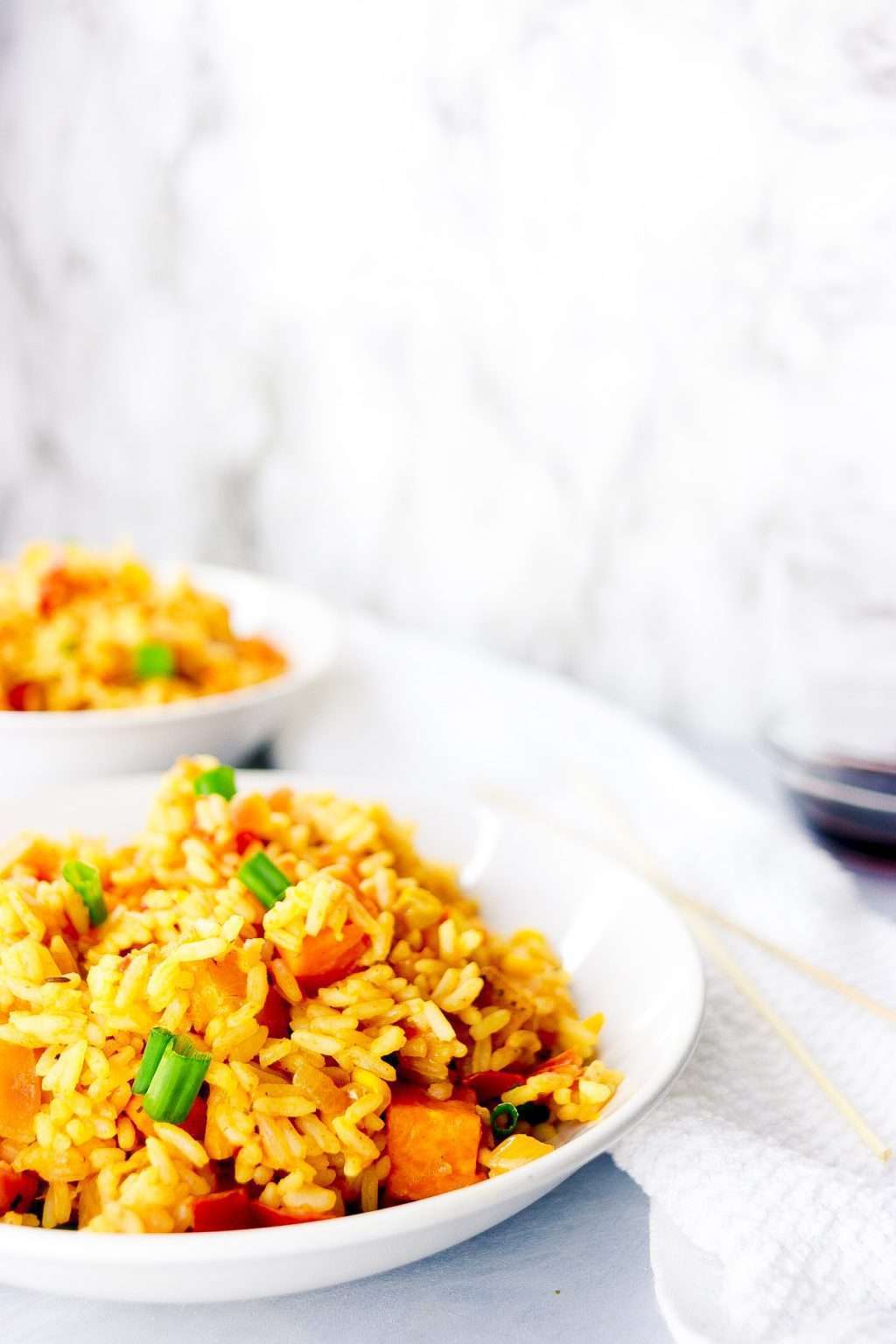 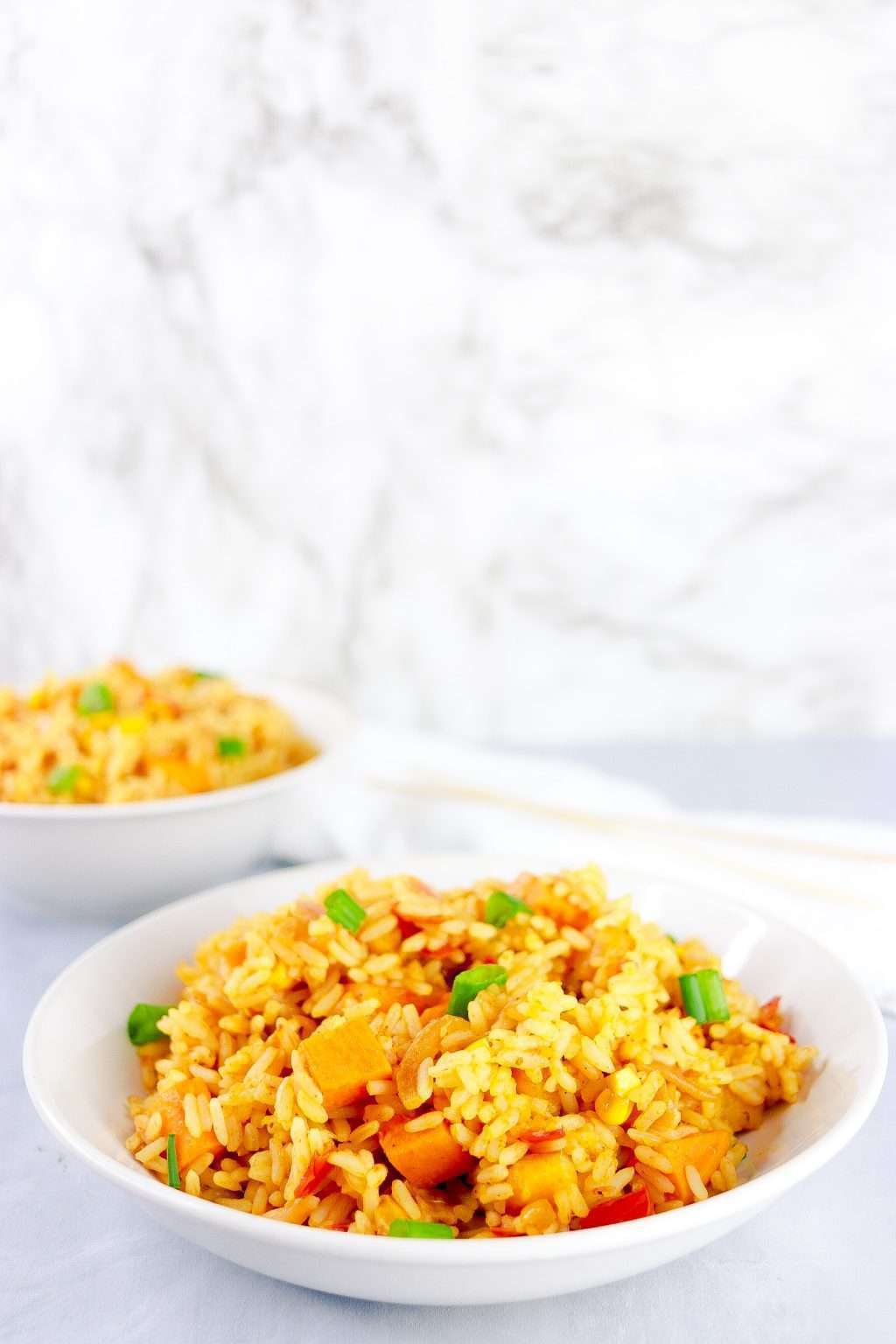 Anyways, the great thing is, the rice turned out amazing. Even my best-friend who happened to be in the kitchen while I was preparing this dish ended up eating 4 plates. I guess it’s because this dish had a combination of sweet, sour, gingery, garlicky and salty. And if you don’t already know by now, a combination all of five components creates the best tasting meal. 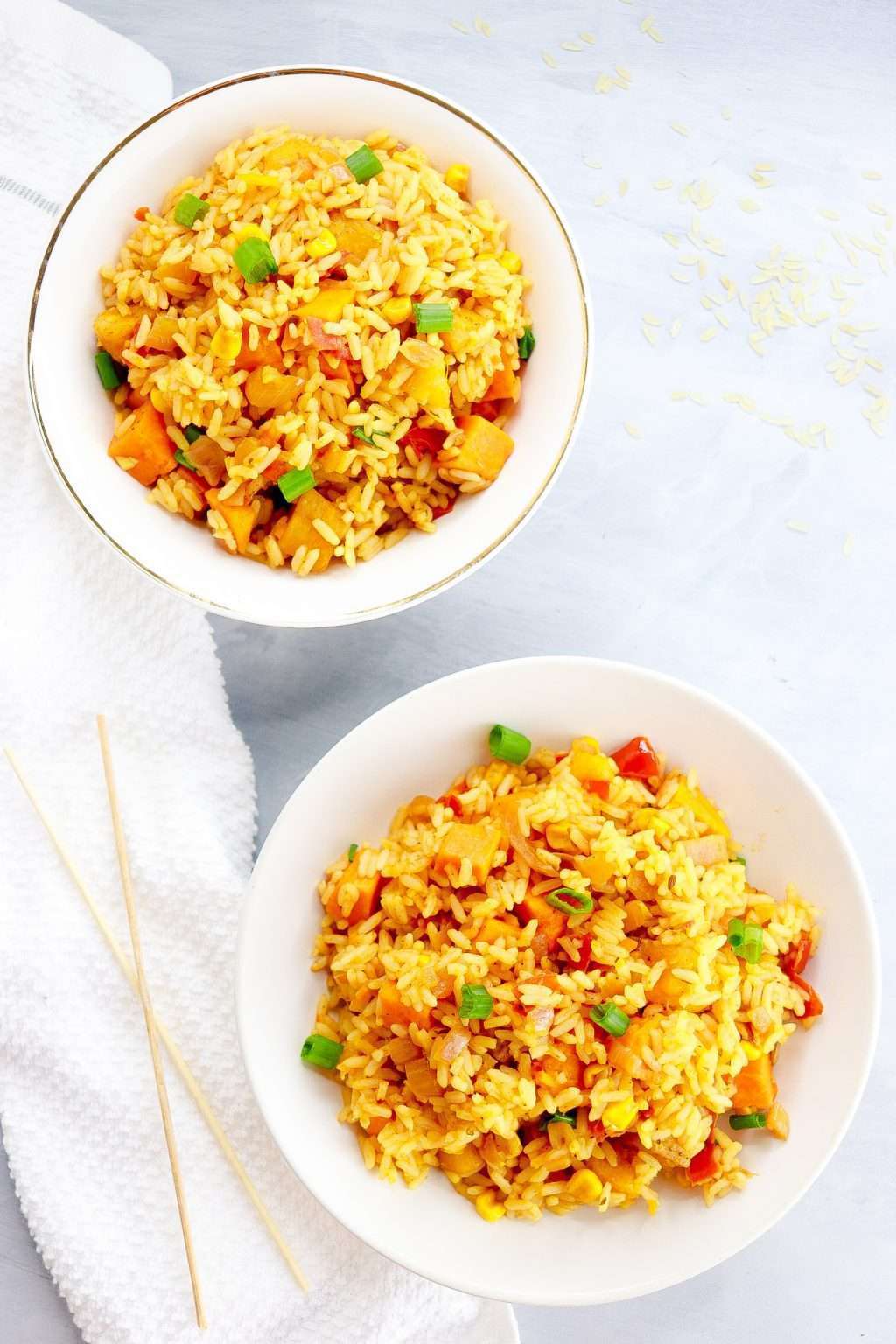 I always try my best to come up with recipes that are quick and easy, especially now that I’m vegan. Because the truth is, I don’t like waiting hours in the kitchen for my meal to be ready. And most vegan meals tend to take several hours to prepare.

This dish is honestly for the lazy cooks out there. So if you happen to be one, this dish will have you out of the kitchen in minutes.

This meal turned out so good that I had no idea what to call it, because it is unique. Unlike most rice recipes that tend to consist of one main ingredient, this one just happens to incorporate more than 3 major ingredients. It will sound weird to call it plantain sweet-potato tomato corn rice recipe, so I decided to just give it a generic name. 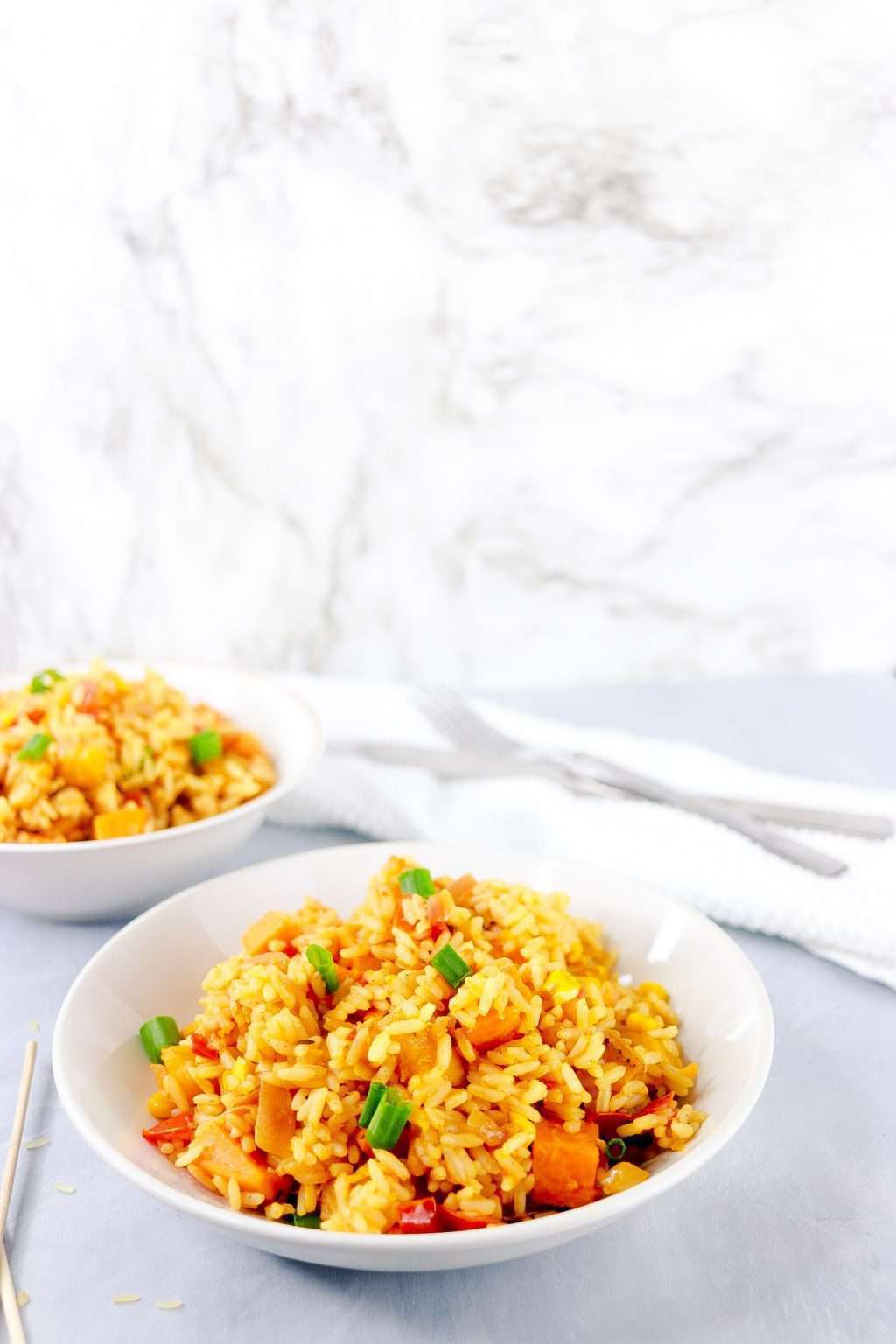 Also this recipe requires you to precook the rice. So if you think it’s similar in preparation to my jollof rice recipe, you’re wrong. You actually have to make sure you fully cook your rice first before adding it to the sauce mixture. It’s very similar to my fried rice recipe, but with completely different ingredients and steps.

I know for a fact that you guys would love this. If my friend could have 4 plates on the go, you guys might honestly eat the whole pot.

Let me know if you give this dish a try. Here’s a link to the recipe video. 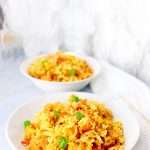 The Best Rice Recipe You Can Prepare At Home

If you don't have a rice cooker, simply boil your water in a pot on medium heat and add in your washed rice and salt. Then cook until done (when rice is soft) and set aside.